One year on.... How we are pivoting the business to develop further. 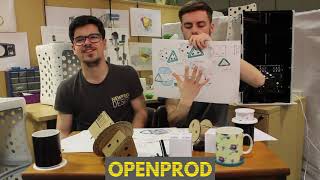 In our design work, Autodesk Fusion 360 is proving more than up to the task of fulfilling our computer-aided design requirements, not least of which due to the versatility and integrated features the software has from the outset. At NewProd, we originally selected Fusion 360 as our primary CAD software due to its free-license for start-up businesses, however with continuous updates and the implementation of new features ongoing, we have been more than impressed with the software's capabilities. This blog post will cover Fusion 360's motion study and section analysis features.

One of our favourite features of Fusion 360 is the ability to share 'projects' (folders containing all the components of a CAD model) with other Autodesk user accounts. This has allowed us to both be able to work on CAD models with ease, having no pack and go related concerns and cloud storage for all our models, freeing up our drive space for other project work.

To familiarise ourselves with the software, our designer James has modeled a simple standing steam engine, created from a set of free plans online (found here), so be aware that whilst we have modeled this machine, it is not a NewProd design, nor do we claim it to be.

As can be seen in Figure 1., the steam engine is of a single cylinder design, with a slide valve driven by an eccentric cam attached to the crankshaft. There is a single counterweight to balance the movement of the piston, and a large 90mm diameter flywheel that dominates the object due its size. Overall it is neat design, though ultimately of little real world use especially considering its small size and could be considered a novelty machine above all.

Creating a motion study in Fusion 360 is very simple. Ensuring you have set-up your joints correctly for your components (we will cover joints in a later blog post), head over to assemble tab in the top horizontal toolbar and select the motion study option at the bottom of the sub-menu. This will bring up the motion study window, which will appear with a timeline and ask you to select a joint study. In this case, joint 9, a revolute joint about the crankshaft was selected to simulate it rotating from the force applied by the connecting rod. A time point on the timeline must be specified for Fusion to use as a reference for the amount of travel experienced by the joint. In this case, 3600 degrees, or ten rotations, was specified to create a seamless rotation for the model. We can see these steps in Figure 2. for reference.

The next step was to take a look inside the cylinder to observe the motion of the piston. It is here that the motion study feature in Fusion 360 highlighted its usefulness. Selecting the section analysis tool from the inspect menu and offsetting it from a flat vertical plane, an exact half section of the cylinder can be achieved. With motion study switched on, we can see the movement of the piston inside the cylinder. Figure 3. shows this motion.

Upon close observation, we can see that the piston is not centered inside the cylinder during its motion. The concern here is that the piston could collide with the bottom housing of the cylinder, or at the very least, cause uneven power production as the travel for each power stroke is not equal. Since the model incorporates a thread onto which the piston is screwed, it can simply be raised on the piston rod to account for this discrepancy and so create the equality desirable that is for the power strokes inside a steam engine.

We hope this foray into the use of motion study in Fusion 360 was insightful and can be applied to your design work. Motion study is incredibly useful for ensuring there are no clashes with components in a design or observing movement of components in detail, so we highly recommend you try this feature in your own design work. Thank you for taking the time to read our blog post, the next in the series for Autodesk 360 will be joints, where we take a look at the importance of the different types of joints in Fusion 360 and how they can be used to influence the motion of components in assemblies.